As “Public Art and New Artistic Strategies” students (master’s degree program at Bauhaus-Universität Weimar), each semester we travel to a different city in order to realize our works within new contents and spaces, and with new people. Last semester we were invited by Maxim Gorki Theatre to be a part of the third edition of Berliner Herbstsalon. I have written an article about the trip which you can find here. And this semester, we were in Bochum which is a city in western Germany—containing one of the most exciting brutalist architecture examples of the country: Ruhr-Universität Bochum. Our team containing 15 students, one professor, and two assistants were commissioned to create public artworks within the university campus and we had 10 days for all.

The campus was created by architect Helmut Hentrich who won the project idea competition where a number of world-wide famous architects were participated in—including Walter Gropius and Mies van der Rohe. Started in 1962, the construction process took around 10 years for all the functions such as the Mensa and Audimax Auditorium to be completed. The massive complex consists of 13 buildings belonging to the faculties of medical sciences, the physical sciences, the humanities and engineering sciences. Today, the whole campus is known as “harbor in the sea of knowledge” because the buildings symbolize ships while the auditorium resembles a shell form.

In our first few days, we had an amazing tour given by the local students studying in the university—in order to create our personal approaches. Even though they aren’t art, architecture or design students, their perspective gave us a unique and considerable point of view. Their everyday experience on site was the key point while finding out what could be valuable to show us. A second layer while getting to know the surrounding was spending a lot of time on campus. We were there almost every morning; spent our days by having meetings, attending workshops, strolling around and exploring the campus, and trying to figure out what to do for our site-specific projects. We also had a location in front of one of the buildings, on a small green area—around half of us camped there, and all of us cooked dinner every day at 19:00.

In the end, we came up with various works ranging from installations to performances. In order to exhibit our artworks, we planned a “Walk of Art” on the last day of our stay. Each of us got prepared for this event, and we were spread all around the huge campus. The walk took around 4 hours and 50 people including locals and students attended to see what we have been doing all this time. Here are some of the examples of the final projects:

While exploring the Ruhr-Universität campus and the city of Bochum, the artist collected everyday objects that belong to others, by asking people to lend the articles or finding the traces of those who inhabit the area of the street. Her performative interactions with each object on the concrete square tiles of Erich Reusch’s artwork Wasserrelief evokes imaginary encounters between her and the objects’ owners. These gestures reactivate the space as a meeting point of the artist as an outsider and the city itself, just as this sitting space at the center of the RUB campus is meant to be.

This work points to the patterns within the initial architectural planning of the Ruhr Universität Bochum. Individuals’ actions within the space unconsciously reflect the organization within which they are functioning. This intervention serves as a moment to interrupt those who inhabit the campus on a regular basis. In a place where they expect to read mundane information, they will instead find non-linguistic imagery. The uncanny (unheimlich) will surface in this and trick them into paying attention to “art”.

This mural covers the surface of one wall on the outside of the campus library building, which is already used casually for advertisements and posters. The mural is composed of photocopies of a painting created by the artist, of a detailed pattern inspired by original hand-painted signage found on the walls around the campus. Over this pattern is painted the rectangular spiral shape of architect Bruno Lambart’s library staircase.

The work Mammon Machine is an ongoing project, which was first realized on the RUB Campus in Bochum. The machine deals with the collection of data as a tool for managing companies and institutions like universities, where important decisions often are made on the basis of abstract data analysis. The Machine examines the relationship between the advantages and risks associated with data analysis, between Utopia and Dystopia. It consists of a cubical frame with a side length of 1.60m. In this frame, the Machine holds found material from the surroundings that are collected by people. Several different instruments, like an anemometer, a Kinect 3D camera and motion sensors measure the surrounding. The Machine collects the measured data but the kind and purpose of it are unknown. The small maintenance opening with a seat for one person makes clear that this Machine is not for the people—the Machine only works for itself. Inside the opening different screens show the collected data. A sensor recognizes the person and triggers a dull click. Through the megaphone a monotonous click and a puffing breathing noise alternate. The continuously running text “All Data is Equal” on the outside LED display refers to George Orwell’s “Animal Farm”.

This project deals with building an observatory inspired by the ancient Sardinian earth-built towers called “Nuraghe”—to observe the night sky above Ruhr University during the artists’ stay in Bochum. The study of stars will eventually be interpreted in “New Constellations” found in the sky and enacted in a “Thesaurus” which would be used to translate Brutalism in a new utopian language. The monolith, built using ‘Umzugskartons’ or ‘Moving Boxes’ shows the contrast between a paper tower surrounded by a monumental concrete campus.

The eventual “fall of the tower” along the course of the artists’ action is not intentional, but in a way, an ultimate conclusion to the temporality of the action. 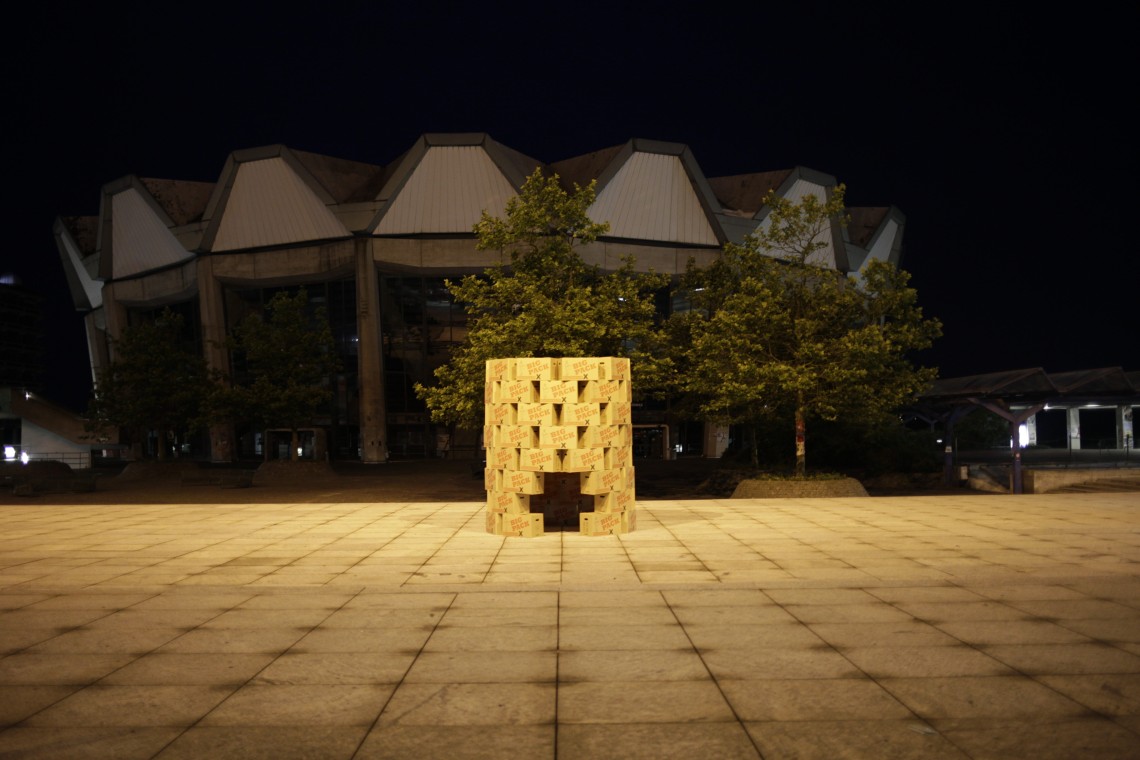 Nothing will Remain the Same by Elham Asadpour
Performance Series | 120’

With repeating the action of throwing the white fabric off from the balcony several times and capturing every single moment, the artist attempts to show that the same object will not stay the same through time, and the ways. It reacts to its surroundings. Everything can be the subject of change. Nothing will remain the same.

The photo series „Leben in Zeiten des Brutalismus“ (Living in the times of brutalism) is an essence of the inhabitation of the artists at Ruhr-University, Bochum for one week. The series shows stylized everyday situations in front of the brutalistic ensemble, which, despite being cold concrete, becomes a piece of home through personal acquisition.

Photography has the ability to transform the way we perceive a physical space. When we see a location photographed, we will hold the memory of that image, perhaps to the point of it directing or even replacing our experience with the literal place. This rings particularly true with iconographic photos, as their broad permeation can shape collective memory. Gursky’s Place responds to such an image, Andreas Gursky’s, “Bochum, University”. Consisting of five square white tarpaulins, the installation obscures the view of the Ruhr-Universität campus from Gursky’s photo. This barrier is an attempt to acknowledge the original view, while also pushing the viewer to perceive the space in a new position. From this conceptual basis, the tarpaulins formal qualities transform the space further as each sheet undulates with the wind, revealing and hiding Gursky’s perspective.

A group of performers moving slowly between the concrete blocks of George Penker’s landscape sculpture “Waterfall”. They become part of the sculpture by extending its lines and surfaces and extending time to its limit by moving as slowly and minimally as they can. Together with the sculpture and the wild nature growing around it, they create a dynamic monument of a purposeless moving structure. The site is located at a central point of the brutalist RUB campus and stands out for its different quality. While the entire campus is designed as a huge monumental structure in a manner that is beyond the scope of human beings, the sculpture creates an “island” of simplicity on a human scale.

The artist has chosen to use the sculpture, scattered along a slope, to counteract with movement the core values standing at the base of the campus’ planning: control, order, productivity, and functionality. As the entire site is a German listed monument for preserving the Brutalist architectural heritage, her intention is to create a temporary living structure, raising the importance of inefficiency, flexibility and unproductive action: the right not to be functional.

Derived from Mischa Kuball’s neon sign KUNSTSAMMLUNGENDERRUHRUNIVERSITÄTBOCHUM (2003), the intervention series “I See Something Else” is created to seek for information other than the given. Kuball’s letters placed on the façade of Ruhr-Universität Bochum’s library building is considered as the starting point—not only as an inspiring artwork but also as a rigid element of the brutalist architecture and as a symbol of the compound structure of German language.

The installation consisting of 39 letters is explored as a hub for about 30 different words from 30 different languages. “I See Something Else” consists of five sentences made by the English meanings of these words—four of them were placed around the campus while one of them was left to be illuminated within the neon sign (conceived as the next step).

View all posts by bauhausbotschafter

This site uses Akismet to reduce spam. Learn how your comment data is processed.